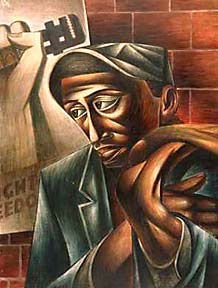 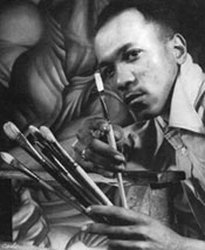 Title of the piece: Fight for freedom

Medium: tempera on board

The painting was made in 1945 by an African-American artist. During that time in America, black people fought for their civil right, after when they returned from war. In the painting, a black man (characteristics: thick lips, dark skin) whom I believe was a working class man, standing next to a “Fight for Freedom” poster. In 1955, an African-American civil movement was a social movement which against discrimination and racism in America. Linking back to the painting, we could see that black American during that time had to suffer through poverty and were only able to afford the most basic facilities of a human life.

The tempera painting cannot be changed once it’s sketched onto the panel; the artist had to make a detailed sketch on paper. In the painting, I could see hues and shades that make the image to be more realistic. The shadows are thin layers of ink dissolves with water to give the most accurate and effective shades. They are distinguished so well that the painting makes me feel like it’s somewhat similar to cubism, even though the brushwork is softer and more realistic. The colors that appear the most on the painting are brown and blue gray. However, dark ivory color of the poster on the top left corner draws the attention to details on the poster that contrast with the whole situation in the painting. In the rendition, I used colored pencils because we don’t any similar material to tempera. The concentration and complexity of colors form a diagonal line from the top left to bottom right of the painting. The hardest part of the painting was the man’s face, since it has a lot of shading and it was challenging to fully demonstrate the misery of this man.

In the painting, there’s a black man carrying a bag and behind him is a brick wall with a poster which was glued on it. He looks enervated; his face could tell that he has been suffering. This man belongs to lower class in the society, based on his outfit and attitude. The poster behind him could be understood as “Fight for freedom”, since it’s the title of the painting. It illustrates a hand holding something that is similar to a pipe wrench. The painting is full of irony because African-American in 1930s had neither civil right nor proper education. In a way, we could say black American back had no freedom as US citizens.

The common style of paintings in America in 1930s is realism. It is very popular with Social realism art movement to reflect on social issues like discrimination and racism in this painting. The most important characteristics of realism are subject matter and genres. Most artists would pick rural or urban lifestyle to demonstrate the society under their perspectives. Depending on different genres, it could be historical, landscape and portrait paintings. Realist artists concentrate on hue, colors and context of the painting. There are a lot of details that make the subjects to be more realistic.

Link between the movement and my painting

There are qualities that I’m going to use in my painting in order to characterize the movement. The main content of every social realism painting is how it reflects on the social issues and situation. To me, I think having a painting about my perspective towards the society can demonstrate the characteristics of Social Realism. Moreover, detailed and realistic images would also be included in the deer parade. I’m using neutral colors since they were commonly used in famous paintings.